There has been a ton of hype and hoo-ha over the new L'Oreal Lash Paradise Mascara lately. I heard it's a good dupe for the Too Faced Better Than Sex mascara, which I personally haven't tried, but I also heard from some that it's even better. My curiosity got the best of me and I had to try this mascara out. Everyone has been obsessed with it so I had to see if this lived up to it's claims of being the best drugstore mascara out there right now. I've been testing this out for exactly one month today, and I'm ready to share my thoughts on it! 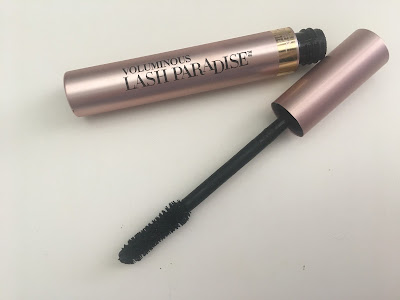 It comes in an adorable baby pink tube, and has a brush thats slightly shaped like an hourglass. I usually prefer wands that are smaller and plastic, but I don't mind regular ones if the mascara is good. I believe I bought this for $9.99 at target.
This mascara claims to have "a silky smooth formula to glide evenly and easily. Volumizing and lengthening to deliver a full lash fridge that's feathery and soft. No flaking or clumping."

I'm not going to lie, when I first tired this I did not like it. I seriously couldn't understand why everyone was raving about this. I didn't care for the formula, and thought it was kind of dry and sticky. I thought it made my lashes long, but didn't give them any thickness. I'm not a fan of the original L'Oreal Voluminous mascara, so I also wasn't surprised that I didn't like this either. After a week or so, I just thought it was OK, and nothing special.

AND THEN I CHANGED MY MIND.
I'm not completely obsessed, but I kind of am. 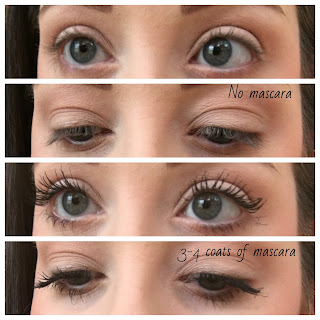 So here is the first time I used it. No mascara on the top two photos, and 3 to 4 coats on the bottom two. I know I said I didn't like it at first, and some of you may be wondering why. If I saw this photo of someone else's lashes, I'd probably think it looked great and that they are crazy for not liking it. Let me explain. I'm ridiculously picky when it comes to mascaras. This didn't give me as much thickness to my lashes like other ones do (e.i. Covergirl Supersizer and Maybelline Lash Sensational), so its hard for me not to compare it to ones that I love. 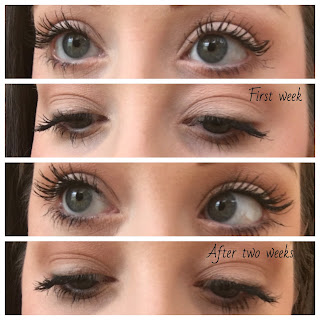 Now let me tell you what changed my mind. Like most mascaras, the formula changes a bit after the tube is open and you use it for a week or two. After two week I started to like this more and more. It coasts my lashes better now and I get a ton of length, along with the thickness that I like my lashes to be. It also gives me really great volume and curl, and I love the way it looks on my bottom lashes. It doesn't flake or smudge on me like the claims state. You can see the difference in the top to photos (first week), and the bottom two (after two weeks), where my lashes are thicker in the bottom photos. I really like wearing this on days that I don't wear any shadow or eyeliner. Also, like L'Oreal claims, it does give you lashes a very feathery look.

My only gripe with this is that my lashes seem to 'fall' throughout the day. They don't look as fresh and when the mascara is first applied. But this is easy to reapply if needed, which is nice because I find that some mascaras are hard to reapply after its all dried and such.

So do I think that this is the Mascara God's gift to earth? Not exactly, but it's pretty darn good. The more I use it, the more I like it. I do prefer the Maybelline Lash Sensational still, but I've been reaching for this more than my beloved Covergirl Supersizer.
I haven't decided if I'll repurchase it again yet. I'm going to revisit the Maybelline one after this is gone and then see if I miss the Lash Paradise.

Have you tried out the L'Oreal Lash Paradise yet? Let me know your thoughts on it in the comments!

Beauty begins the moment you decide to be yourself